Anyone who knows me will tell you that I love sleeping. I mean, love it. Like most people love their kids or ice cream. Yet lately, my sleep has been spotty at night due to weird dreams.

Like most people sleeping during the pandemic, I often dream that I go somewhere, like the grocery store or out with friends, and realize that I don't have my mask on and that I am breathing the Rona-infected air. I feel like that dream is pretty self-explanatory. Dreams that I am having more frequently include my ex-friend ______.

I have not talked to _____ in years. ______ and I used to be besties, but now our communication doesn't go any further than picture likes on social media. ______ has made it clear, through their silence, that they no longer want to have a friendship with me. I say that I am okay with it. I have prayed about it. But truth be told, I am still hurt over it while social media pictures show ______ out and about and living life not worried at all about me.

Over the past few nights, I have been having dreams, taking place in different places and settings, where ______ and I get into blowout arguments and fights. For the most part, I can not remember what ______ and I are fighting about when I wake up, but last night was different. I dreamed that _______ and I were at some party, and ______ got in my face, screaming, saying that there were five reasons that we were no longer friends. The only one I can remember was my being too fat and ugly. This was interesting. Obviously, I don't think these things about myself. But I did often feel that _______ felt this way around me. We went to the mall once together and ______ tried to keep a distance between the two of us so that  no one would think we knew each other. I remember this day clearly because my feelings were low key hurt and I got a really cute pair of earrings from Forever21.

I have never been good at interpreting dreams. But maybe God is telling me to get ready to fight off negativity in the new year. I don't know. I think I'm going to sleep on it.

My period was three weeks late. I know, T.M.I.

And, like any woman who has had a period come late, I was majorly freaked out and panicked. Believe me when I tell you that I was mere moments away from going outside and running into traffic! In hindsight, I see that this was all part of my ever-getting-increasingly-horrible PMS, but what are you going to do?

I called any friend that would answer the phone to ask them to pray that my period would hurry up and come because not getting it on time makes me incredibly anxious and scared. And they all pretty much gave me the same response: "You aren't pregnant, so why do you care?" Um, what?! I have been getting periods every month since I was 11-years-old. Forgive me if it not coming in a month rubs me as curious on the low end and horrific on the high end. But you won't believe what I discovered in talking to my friends. I have some homies that have gone two and three months without having a period before and they were not pregnant. Is that not crazy?!

Mere hours before my period actually came, I was feeling pretty down and hopeless. "Maybe I am going into menopause," I said with a deep sigh as I talked to P on the phone.

He was not with me for me to punch him in the face, so I just screamed silently as he changed the subject about something guyish that I didn't care about. As he rambled on and on I thought about what he had said. What if he was right? He is a nurse after all. What if I was sliding on the banana peel towards middle age? I mean, is that possible? I can remember so clearly being in college and goofing off with my friends. And what about babies? True enough, I do not want kids. But for some reason it dawned on me that I did want to be married while I was still young enough to have them. I guess so that people could see that I was childless not because I am old, but by choice. Is that stupid of what?

After I got off the phone I cried and cried, mourning my lost period and my youth. Sooner than later, I imagined myself in a cold gynecologist's office, going over hormone replacement therapy and how to address vagina dryness. I though of my grandmother, who had gotten a hysterectomy. She was the picture of femininity; however, every few weeks, she would ask me to help her pluck her chin hairs. Was I going to get chin hairs? I cried myself to sleep, only to wake up an hour later to go to the bathroom and discover that Aunt Flo had arrived, unapologetically late. I sighed a sigh of relief. I was young for another month.

I know that we all have experienced varying levels of stress and even mania during this seemingly never ending quarantine. Who didn't see the live videos in the beginning of folks fighting over toilet paper and cleaning wipes? At that point, I was waking up in the middle of the night and disinfecting the door knobs and toilet seats. Now, with threats of a third wave of crazy infection numbers on the rise (How did I miss the second wave?), I find that my Rona stress has increased to new heights of nutty.

A friend of mine got Rona earlier this summer. His roommate gave it to him and the other three boys that live in their apartment. He didn't get outrageously ill. He didn't end up having to go to the hospital or anything like that. But he has lost his ability to taste and smell. I hear that this is a common symptom. But his roommates have gotten there senses back and he has not. It has been over a month.

After hearing this, I found myself licking seasonings off of my hands to make sure that I could taste them. This was followed by a banana, blueberries, a teaspoon of BBQ sauce, and a protein shake. Once I was sure that my sense of taste was in order, I found myself nose first in the dryer sheets, trying to make sure that I smelled those. Then I sprayed Lysol and perfume to smell them until I almost made myself puke!

This is life in RonaWorld. You either have spazz outs like me or you go to bars without your mask on as if it is 2019 and you can still party like it's 1999. Some people fall in the middle. All of us are over it.

Well. Until next time. Those jalepenos in the fridge aren't going to lick themselves.

Izzy and her sortabae, let's call him Joe, are about as complicated as complicated can get. Their texts to each other are these mind bending, incomprehensible riddles that leave each of them guessing and scratching their heads. I can't tell you the amount of brain power that she and I have invested into trying to figure out what he meant, and how much time she has put in to sending him messages that are just as confusing.

Again, I was at a loss for words. But only for a second. "Are you serious? Girl, nothing is worth literally giving up your booty!" I shouted.

I know that in relationships, you have to compromise, but geez, aren't we supposed to draw the line somewhere? Izzy insists that more people are into it than I think. This could be true. I didn't think that people were really into French kissing but I was wrong about that. I guess my question is this: once that is given up, what is next? Izzy says that saying that she will do it and stringing him a long is still on the table. I don't know. I don't see a man that is really into that letting it go if he doesn't get it. But again, I've been wrong about these things before.

For about a week, I had a crush on a dude named Jackson that I went to college with. I thought he was cute even then, but I was a freshman and he was a senior. To say that we ran in different circles is an understatement.

These days, Jackson is more of a computer love. I pretty much stalk him on Facebook. At almost 40, he spends his days making sexest and socially irresponsible posts, that is, when he isn't posting videos of Instagram models twerking in bathing suits. I can't say that Jackson is likable because he isn't really. Ladies you know what he is: he is that guy that you can't stand that just happens to be hot. But of late, I have felt kind of numb to the world, so having a crush felt nice. Something about liking someone makes your heart feel full.

But all things have to come to an end. My crush was coming to a slow down just two days in when he made some ridiculous, double standarded (new word) posts about female sexuality. He is the type of guy that places unrealistic and unfair purity standards on women while he slides in DMs and most likely sleeps with anyone who will give him the time of day. I know, sexy.

I was talking to P about his crazy posts today and P goes, "I remember this guy. I was eating lunch at his table once while we were in school and you walked into the cafe and he called you a fat bitch."

Just as he said this, it sounded like a car was crashing in my ears, and I got a weird feeling in my chest. It didn't alarm me as random chest pains often do because I remembered the feeling. I hadn't felt it in a while but it was very familiar: my feelings were hurt.

I got off the phone and took a two hour nap so that I wouldn't cry and woke up to a text from P. He apologized for telling me. I said it was cool. I mean what can I do? Go on FB and curse Jackson out for something he said about me when I was 18? That would be silly. Yet, as old the remark is, it still hurt my feelings.

Dry skin is a nightmare for so many of us during the fall and winter months. Luckily, Jana Blankenship, founder of Captain Blankenship products and author of Wild Beauty: Wisdom & Recipes for Natural Self-Care, has the recipe for smooth, hydrated cold weather skin. 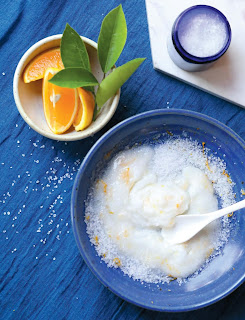 Mix ingredients together in bowl with spoon. (If coconut oil is hard, you can melt quickly and add to mixture once cool. If you want to add shea butter for even more nourishment, do the same thing.)

Once mixed, with spoon, scoop scrub into jar with lid.

Use once or twice weekly or as desired; by rubbing salt with dry, clean fingers in circular motion all over body and feet.

If stored out of direct sunlight, will keep for up to a year (if water is kept out of jar). 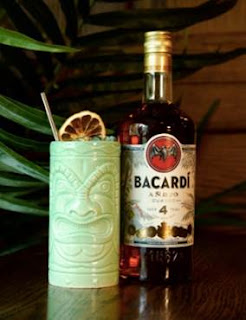 METHOD: Shake and serve over crushed ice in a tiki mug. Garnish with a dehydrated orange wheel and/or mint sprig